The Saga of Hugh Glass 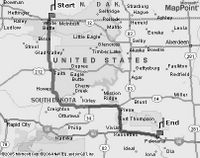 Glass' Probable Journey After Being Mauled (Click for a Larger View)

Although few in numbers, non-native people traversed the country around Thunder Butte from time to time beginning in the late 1600s. The fur trade was important in this territory, which was claimed by the French. Prior to the Louisiana Purchase in 1803, French fur traders plied the backwaters, tributaries, and upper reaches of the Missouri River for years. Many of them continued to live and trade in the area for years afterward. Following the Lewis and Clark expedition of 1804 to 1806, American fur traders increasingly turned their attention to the area. The Ashley expedition was one of those early ventures. Hugh Glass was a frontiersman from Pennsylvania who joined General William Ashley’s expedition to explore the fur trading country upriver along the Missouri River in 1823.

While out hunting game near the present day site of the Shadehill reservoir near Lemmon, South Dakota, and some forty miles north of Thunder Butte, Glass happened on a grizzly with cubs. Before he could get off a shot, the grizzly had mauled him severely. By accounts, the bear had ripped out great chunks of flesh and had mangled him pretty badly. One of his companions managed to bring down the bear with another shot, but the exploring party felt that he hadn’t much time left to live.

Leery about keeping the party hunkered down in hostile Indian country, the party left two men—John Fitzgerald and the young Jim Bridger—with Glass to await his death. Accounts vary, but when Glass still hadn’t died after two to five days, the two men left with him took his gun and belongings and decamped in order to rejoin the main party as quickly as possible.

Unexpectedly, Glass didn’t die. Instead, he crawled and pulled his mangled body through rough prairie grass across one hundred miles to Fort Kiowa, a post on the Missouri River. His path would have taken him within several miles of Thunder Butte. If he was capable of dragging himself across one hundred miles of open prairie, perhaps he even dragged himself to the top of the butte to scout the country for hostiles and the way back to Fort Kiowa. In a fictionalized account of the Hugh Glass saga published in 1954, Lord Grizzly by Frederick Manfred, Glass used Thunder Butte as a key landmark for making his painful, tortuous trek back to civilization. But, we will never know for sure.

Vowing vengeance against Fitzgerald and Bridger, Glass found Bridger at Fort Kiowa, but did not kill him—possibly because Bridger was a young man who had erred in judgment. Fitzgerald was not to be found.

Glass continued pursuing the life of a frontiersman and died in 1833 in an Indian attack. The Hugh Glass saga has been recounted in numerous books about early days in South Dakota and the North American frontier. A monument to Glass can be found at the Shadehill Reservoir near the purported site of his mauling by the grizzly.