When I was very young, all the horses in the country started to disappear. There was a hog breeder down on Cherry Creek that was suspect. The sheriff found that he raised hogs in a box canyon. His riders would steal horses all over the country, run them along the rim of the canyon and shooters would kill the horses and roll them off the rim in to the canyon where the hogs would fatten on them.

Joe Briscoe, our neighbor, thought my brother Joe shot one of his horses (he probably did) when Joe was about 15. One day, Joe was on his way home, stopped to water his horse at the stream, and Briscoe rode up and hit Joe over the head with his gun. Joe came home covered with blood. My mother went to the sheriff in Dupree, swore out a warrant for Briscoe's arrest, and the sheriff locked him up. I never knew what happened to the case, but I stayed over night with them after that and Briscoe was home as usual.

One of the Briscoe son's, Jack, was my age, same size and generally not much smarter than me. One day, we rode up to each other out on the prairie, started to talk, and Jack said, “your brother shot my Dad,s horse,” so I piled off my horse and we started to fight. We fought for a long time until we were out of breath. Then we sat down and started to talk and decided the damn horse was not worth the effort.

Jack and I remained friends for years. When WWII was declared, he was in the Army and was visiting us in Alameda [California]. We were out sightseeing when it was announced on the radio that we had been attacked and all military personnel were to return to the nearest base immediately. We took Jack to Fort (something) in San Francisco. [Pretty soon afterward] he showed the Axis what we Americans are made of. He immediately got taken prisoner and for the next several years they had to feed him. He is dead now. So ends another segment of law and order in the old West.

A little girl I used to play with was Tiny Kelly. The last I heard she was no longer tiny and lived in Casper, Wyoming. Her father was Jack Kelly, and he was reported to have been the last outlaw shot in the West. Jack was said to have been just a common, harmless rustler, but the sheriff pursued him in to the Slim Buttes, near Buffalo, SD, where he knew the law could never find him. Sheriff Floyd Short walked up on him in the wee hours of the morning. Short said Jack reached for his gun so Floyd shot him dead.

I went to high school with two sons of Floyd Short, the sheriff, and they used to talk to me about the terrible anxiety it caused them to think their father might have killed this guy without provocation. I used to assure them he was only doing his job and he had lots of provocation, but I never knew.

Now you have heard about all of the crime that ran rampant in that part of the country when I was a kid. Oh, yeah! There was another one. When I was in high school [in Lemmon], I went in the city liquor store and bought a 1/2 pint of peppermint schnapps. When I was putting it in my pocket, the chief of police came in the store, and I ducked under his arm and out the door, slamming the door behind me. As I slammed the door and ran up the street, I discovered I still had the door knob and the bolt in my hand. The chief was locked in the liquor store. I kept that door knob for years as a souvenir. For a couple of days, I looked over my shoulder for the chief, but he never bothered me. He also used to chase me all over the country in my old cars and could never catch me. Years later, my mother met him on the train coming West and she had a long talk with him. He told her that I was one of his favorites, that he always knew I was a smart kid and I would do well. And he never could catch me because he didn't want to.

Editor's Note—John Crowley later went on to have a career in law enforcement in California.

Unfortunately and with great regret, I never learned a great deal about "Jim". When I had reached the age of awareness, probably five or six years of age, Jim was probably in his late forties. Jim was married to Wyona Hunt whose parents lived in the Meadow to Lemmon area. Wyona was a chubby, very red haired, and freckled woman who's sole interest in life was probably her husband and children. The James Shockley children, from oldest to youngest, as I recall were Dora Lee, and several years her Junior were Joseph, Jenny Lee, and then Willis.

Dora Lee, the oldest child was about four years younger than I, when they lived on the first farm that I was aware of, around Coal Springs. I stayed with them sometimes and Dora Lee used to follow me around like a pet. She was a sweet girl and we have stayed in touch to this day. About the time she graduated from high school in Lemmon, she married Marlin Gaskjolin and they lived on a farm South of Lemmon until his death a couple of years ago. Since I was considerably older than Joseph, Joey as he was called, we had very little in common. The next daughter, Aldene, a very sweet and pretty child, was very personable and bright. I lost track of her completely after I graduated from high school. She was killed in an auto accident when on her way to take her exams for her Registered Nurse degree, her car left the road and she was killed. The next girl , Jenny Lee, is married and lives in Nebraska. She and her husband visit the Lemmon area often.

Editor's Note—James Shockley was John Crowley's uncle, the brother of his mother, Mayme, who was married to Thomas Crowley. The Crowleys and Shockleys had migrated to the Thunder Butte area from Lake Williams, North Dakota, where James' and Mayme's parents had put down roots after relocating from Wisconsin.

You often wonder about what happened to your old buddies from childhood. Tony Roach was one such friend for John (Gene) Crowley. He was a Native American boy who used to visit the Crowleys and often played with John when he was young. In fact, John recalls that Tony spent much of one summer with the Crowleys near Thunder Butte and a good portion of the three or four years following when he was a boy. Someone sent John an obituary about Tony. From the Faith Independent on August 6, 1997--”Anthony 'Tony' Roach age 82 of Dupree, SD, passed away on Tuesday, July 29, 1997 at the HIS Hospital in Eagle Butte.”

The obituary goes on to say that Tony “was born on April 4, 1915 at Cherry Creek, SD to Carter Charles and Jennie (Cheyenne Women) Roach. He lived on the family estate north of Iron Lightning. He worked for Adolph Silverman at Dupree, and the Wally Knight Ranch, for BIA Roads Dept. for 10 years, for Marion McDaniel of Lantry and for Frank Ganje. He worked for the CRST Roads Dept. as a heavy equipment operator and as a mechanic; and he was involved in ranching. He married Elizabeth Yellow Owl and then remarried to Lydia Hollow Horn.” According to the notice, Tony was survived by eight children, thirty grandchildren, and twenty-nine great grandchildren. 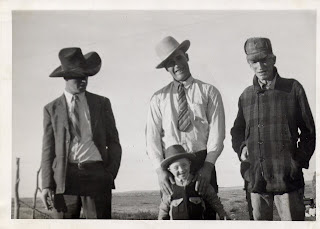 
This photo shows brothers Joseph and Neal Crowley along with their father, Thomas, and their sister Cece's boy, Tommie, at the family home near Thunder Butte shortly before much of the family moved to California. This picture would have been taken in the late 1930s or perhaps 1940. Joe and Neal are all dressed up, perhaps for church. My guess is that the family (or some members of the family) was about to set out for church in Glad Valley.

He sits atop a mountain
Alone, without a friend
One finds it hard to fathom
Empty miles without end

Where the antelope and buffalo
roamed so long ago
and now she stands unchanged
The mountain, home you know

Thunder Butte they call her
A monument to the past
He sits with awe and wonder,
How long can a mountain last?

Now a lightning flash and thunder
Roars, no longer any wonder
This small boy is lost and scared
As the world erupts in flash and roar

Why did they call her Thunder Butte
He thinks, as the ground shakes `mid
Thunderous roar, did this old mountain
Always terrify the dumb and mute?

Mid thought, the pony bolts away
Frightened by the attacking fury
Of storm and thunder and flashing spray
A small boy stranded, in nature's way

In the dark he hears a rattling snake
And he pleads with God to help
As he prays the moon comes out
The clouds part, a path to make

The little fellow looks back to see
A black visaged mountain under clouds
Thunder Butte, a kind old friend
Now that tragedy was not to be