On Monday afternoon, March 26th, after spending the morning chatting with some of the older ladies in Faith who knew Uncle Neal, my sister Eileen and I drove out to Lemmon. I took a bunch of pictures of the "old" high school my dad went to only to find out later at the chamber of commerce that the REAL old high school was torn down 25-30 years before. An interesting gentleman at the chamber told Eileen and me that we looked like twins. Then he said that Eileen looked like Anna Nicole Smith--not the dead one! We were a bit startled at that, but perhaps the fellow needed a new pair of glasses. After that, we entertained each other by referring to ourselves Anna and Banana Nicole for the rest of the trip. Before leaving the Chamber, we stocked up on t-shirts and other fine collectibles produced for the imminent centennial celebration of the town's founding. Also before we left Lemmon, we checked out the Petrified Park, but there wasn't too much of interest. It hasn't changed much since I was a kid. From the old photographs of the place that I've found on the web, it probably hasn't changed much since it was first built. I don't know when that was, but guess it was 70 to 80 years ago. Basically, the park consists of neat stacks of rock – all petrified wood – packed and cemented together into large conical and other shapes. It is an odd way to present fossil material from another era, but I imagine that it was considered an imaginative display when it was first constructed.

We drove out to Glad Valley that afternoon looking for the old Catholic church where grandpa, grandma, and the kids used to go when they lived near Thunder Butte. The church is gone. Rex Witte, about 75, who ran the old general store (closed mid-1990s) told us that the church was sold and hauled away for another use years ago. The graves were all moved to Isabel. This was of particular interest to me because I had been nursing a theory that our Uncle Tommie, who died as a child in the 1920s was probably buried in Glad Valley. My dad said that he thought Tommie was buried in Isabel, where he died of a ruptured appendix on the surgeon's table, but he had not been able to find the grave on an early trip back to South Dakota. We talked to Rex for a couple of hours. He was a real character, but in some ways the most interesting person we talked to on the whole trip. He gave us his perspective on life in the area, including some of the tensions between ranchers and Native Americans that have persisted over the years. Rex said that he knew our Uncle Neal and that he used to picnic with the Crowleys on top of Thunder Butte. Interestingly enough for anyone following the news about the honeybee die off taking place across the country, Rex has lost all of the bees in his hives.

Tuesday morning, we went out to the county building in Dupree and looked up the old land records for grandpa Crowley's homestead. I was able to make a copy of grandpa's original deed to his homestead, which would have been about one mile northwest of Thunder Butte. According to the local records, he lost the land in 1924 after failing to pay his taxes beginning in 1921. This was news to us. We hadn't known why the Crowleys had moved from the original homestead. Of course, failure to pay the taxes doesn't necessarily tell the “why.” The land may not have proved very productive, and the grass may have looked greener so to speak on another parcel available for lease.

That afternoon, we drove out to Isabel to find Uncle Tommie's grave. Everyone in the family who actually knew where the grave was has died, if they ever knew. I spoke to the lady who runs the town newspaper, and she suggested that I talk to the woman who works at the post office, as her mother has a good memory for people and events of yesteryear. I did talk to the woman at the post office and she was helpful enough to call her elderly mother, but she knew nothing of Uncle Tommie or his grave. She suggested that we talk to a woman at the grain elevator. When we drove up to the grain elevator, I was uncertain where to find the office. I was surprised to find that Eileen knew exactly where it was located because it was along the side and up a set of stairs, just as it had been in some movie that she had seen once. Hollywood proved helpful that day, since that was exactly where the office was. The woman in the office at the grain elevator was on the cemetery board and insisted that I wait while she ran home to get her records. When she returned, we found that she did have a Thomas Crowley listed as buried in the cemetery, and the dates were a match. Mystery of mysteries, though, because her records also showed an unknown Mr. Crowley buried next to him. She said that it would be highly unusual if the grave was not that of a relative. Later, someone in Faith who was familiar with such things said that it could have been an empty plot purchased by a Mr. Crowley, most likely our grandfather. Anyway, we drove out to the cemetery and found Uncle Tommie's grave with a nice concrete and brass marker on it. It didn't look very old. Another mystery--could Uncle Neal have placed it on the grave? According to the marker, Tommie died in 1927, when he would have been just a teenager. Perhaps Neal placed a marker on the grave before he died in the 1970s.

We took pictures at the cemetery to document the grave. Finding Tommie's grave was the fulfillment of a sort of personal crusade of mine. I was intent on finding him, since he really was just a kid when he died and dad said that his grave was lost. I was glad that we had found it. Even though Tommie died years before I was born—really it was an entirely different time and place—I felt that we were reconnecting in a way with a long lost relative. I felt a powerful tug of emotion finding the grave and said a few words over it before we left.

We drove back out to Thunder Butte later that afternoon, our second visit to the butte of the trip, coming in from one of the ranch roads to the northeast. Rex Witte had told us that we didn't need to get permission to cross the ranch land as long as we were careful to close the gates behind us as we drove across the property. We found what looked to have been the old road into the butte from the north and followed it probably to within four miles of the butte before it washed out. The washout and surrounding land were very rugged territory to cross, and I was leery of taking the Nissan Pathfinder into it for fear of scraping out the bottom or otherwise damaging it. So, we walked another two miles toward the butte, hoping to make it to the vicinity of at least the property where my grandparents lived in the late 1930s. Cold temperatures, 30-40 mile per hour winds, and fading light as the day drew to a close eventually turned us back, though. Probably, the closest we got to the butte that day was about two miles to the north of it. 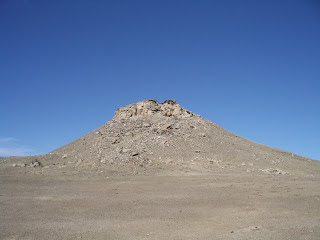 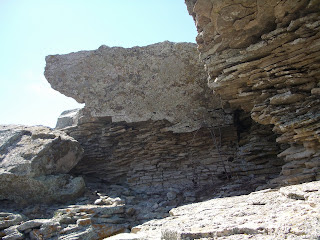 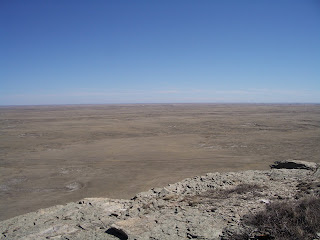 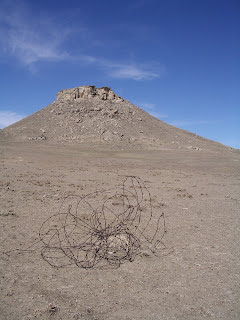 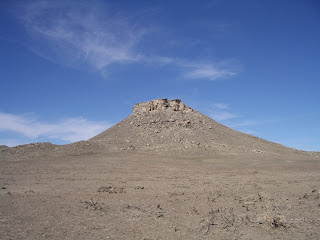