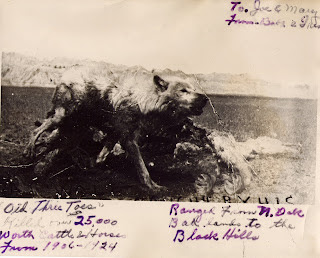 I've often wondered about the photo of “Old Three Toes,” above, which belonged to my Uncle Joe. The photo is apparently of a museum exhibit, and Old Three Toes was actually mounted and on display. What was the significance of this wolf? I knew from the family that Three Toes used to wander South Dakota not far from Thunder Butte. During the early 1920's, Old Three Toes of Harding County was thought to be the last wolf left in the Tri-State area around Thunder Butte, and was credited with any predator related attacks on local livestock.

The gray wolf used to roam the plains, living off of the buffalo, antelope, and other animals that were wild to the prairie. With the die off of the wild bison from over hunting and the introduction of livestock into the area by homesteaders, wolves soon adapted and began preying on the cattle and sheep living in areas like northwestern South Dakota. It's difficult to imagine today, but wolves were once considered such a threat to ranchers that extensive government control programs and wolfers worked to drive this animal to local extinction on the prairie and in much of the West.

According to Bruce Hampton's book, The Great American Wolf, published in 1997: “Three Toes, a wolf of northwest South Dakota who had previously lost a toe to a trap, allegedly killed twenty cattle during a single night and sixty-six sheep during a subsequent two-night rampage. By the time it was finally trapped in 1925, ranchers claimed it had destroyed hundreds of livestock worth $50,000, the greatest economic loss ever attributed to a single wolf.”

Fifty thousand dollars was a considerable sum of money back in those days, and will still buy a decent amount of pasturage in the Thunder Butte area. According to Peter Coates, whose essay appears in The Massacre in History, published in 1999: “...the most notorious [wolf], Three Toes, apparently gave 150 men the slip for thirteen years.”

Recently, I came across a story in the Arco Advertiser about Old Three Toes, which I've excerpted here:

“The most noted outlaw wolf in northwestern South Dakota was Old Three Toes. By 1912, his big three-toed track was plain in dusty sheep corrals where dead lambs were strewn about uneaten. He became known as a killer who seemed to kill for the sport of it. One night he killed many sheep and lambs at three different ranches, but ate only the liver of one lamb. He was killing livestock, including saddle horses and steers at a cost of $1,000 a month when caught by a government hunter in 1925. His mate had been killed in 1920, and after that he hunted alone.

“Archer B. Gilfillan, a sheep herder and noted author of the Tri-State area, tells of the many attempts to trap, shoot or run down Old Three Toes. One man ran him 95 miles during three days in fresh snow, changing horses five times. Sons of Cave Hills ranchers followed him on a 20-mile circle. He then struck out for the Short Pine Hills 40 miles away. They changed horses once and by the end of the second day followed disgustedly as the track circled back to within a mile of their own ranch. When chased by wolf hounds Old Three Toes tricked them with leaps across high embankments, backtracking and once, a thirty-foot jump into water.”

Another source on the web recounts how the end came for Old Three Toes -- "He was over 20 years old when he was finally trapped July 23, 1925, in the Kahoun pasture, near Gallup, SD, by Clyde F. Briggs, deputy predatory animal inspector for South Dak­ota. The animal was still alive when discovered in the trap, and an effort was made to take him to Buffalo, the county seat, before killing him, but he died before reaching that town. He was 6 feet long and weighed between 75 and 80 pounds." The photo below shows Briggs pictured with the dead wolf. 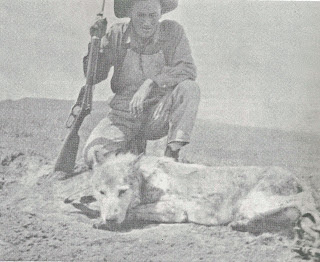 Clyde Briggs at the Capture of Old Three Toes

Whether Old Three Toes' renown is actually deserved or not, the reintroduction of Canadian gray wolves into Idaho, Montana, and Wyoming has caused great controversy, as wolves are an intelligent predator and still seen by many ranchers as a potential threat to their way of life. Wouldn't be wonderful, though, to find some way to co-exist with these remarkable creatures?

An interesting story in the lore of Thunder Butte country is the tale of the ranch dog who went to Hollywood. In 1930, a local cowboy named Ger Orvedahl began training a six week old puppy in the finer arts of helping out around the ranch. Tuffy was a quick learner and over time developed an extensive repertoire of really interesting tricks that he could perform when Ger employed various hand signals and voice commands. Ultimately, Tuffy learned to recognize by name and fetch many household and ranch implements. Later, Ger got the idea of showcasing Tuffy's talents by putting on a show in Faith, about 1932, where Tuffy would fetch various objects and lead a horse down the street. Local residents were so amazed at Tuffy's talents that Ger decided to take Tuffy to Hollywood in 1935.

While the early months were difficult ones, Ger ultimately got the attention of actor Tully Marshall, who became acquainted with Tuffy while filling up his car at a gas station near where the Orvedahls were staying. Marshall passed the word about this talented dog along to a film production manager, and Tuffy's film career was born. Tuffy had roles in numerous films, mostly Westerns, including:

Tuffy's film costars included numerous famous actors of his day such as Henry Fonda, Fred MacMurray, Buster Crabbe, and Jack Luden. Tuffy left Hollywood in 1941 after an illness on the set of the film, Brigham Young (1941), but continued giving shows and making appearances until 1946, when he died at 16 years of age.

Ger Orvedahl continued to train and perform with dogs until his death in 1954 in Illinois. Ger published his dog training wisdom in the book, The Orvedahl Method of Training a Puppy, in 1950. The Orvedahl family maintains a website devoted to the story of Ger Orvedahl and his Hollywood wonder dog, Tuffy, here. Ger is pictured with one of Tuffy's successors, Tuffet, below. 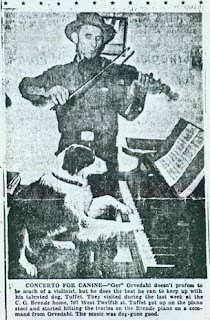