Before I ever had a car, there were numerous cars passing before my child's eyes. Perhaps the first was a Model T Ford that my mother drove to Glad Valley for the occasional trip to take the eggs and buy groceries. On this particular trip, I was about two years of age and was made to sit in the back seat. The only part I remember of this particular trip was that on the way home from Glad Valley, with a month's supply of groceries, my mother drove over a bridge that spanned a deep creek. As she drove up a steep hill on the far side of the bridge, the Model T stalled. My mother got out to crank the Ford and when she started to crank, the car started backward down the hill toward the deep water. She ran and grabbed me out of the back seat as the car swept past her and down the hill. Young as I was, I distinctly remember the Ford veering off the road at the side of the bridge, where it plunged over the bank and into the deep water. In just a couple of minutes it had sunk out of sight and all that was left were bubbles. My mother hoisted me to her back and set out for home, about ten miles away, as we lived on Thunder Butte Creek at the time.

Many Model T Fords came and went. The Model T cost about $600 brand new. It was open on the sides and had a roof that folded down something like the convertible. In winter, my folks would put on side curtains that snapped into place to keep out the bitter cold winds. One of the greatest problems with the old cars was preventing the radiators from freezing solid in the below zero cold. The only anti-freeze available in those times was alcohol. The alcohol worked fine until the car had run for a while. Then, after heating up, the alcohol would evaporate and the car would start to freeze. You knew it was freezing up when plumes of steam would begin to spout from the radiator cap. You see, when the ice formed in the radiator, it displaced the water and actually the car was dry.

My brothers, Joe and Neal were always working on some old car. The old cars were not very techno and most problems could be fixed with pliers and wire. If you needed gaskets, the best material was rubber from old over-shoes and leather from old boots and shoes.

One of my first cars was a 1928 Chevrolet sedan that someone gave to me, or probably I found it abandoned some place and just gave it a home. It was a nice car, ran quiet and didn't leak much. It did have a crankshaft that was out of round, and when the rods started to knock bad, I would have to take the pan off and cut leather bavetting for the rod. This bavette was cut out of an old shoe and inserted on either side of the crankshaft. Then, the connecting rod was bolted down on the leather. It worked fine for a while. When the rods began knocking again, it was time to cut new leather. I finally got tired of the constant rebuilding of the Chevrolet and traded it to Roger Portney who had an old Model T Ford pickup that was sitting out in a pasture outside of Lemmon. He had been unable to start the Ford. It sat in that pasture for all summer and part of the next winter, when we traded.

I used to go out to visit the Model T after school. I would crank the thing until it kicked so bad it had me scared. A couple of times the crank actually hit me in the arm when the car backfired and the crank would fly around, backward. You had to jerk your arm out of the way fast to prevent being hit. After about a month of this dangerous pursuit, I discovered a little metal cup on the front of the engine, which turned out to be the timer. The timer had a rotor inside that would turn and hit each of the four points in turn. When I took the timer cap off, the rotor fell on the ground. The pin, which was supposed to hold it to the cam, was missing and that was why the thing misfired. I went over to the nearest fence, pulled a nail out of the fence post, inserted the nail in the base of the rotor, bent the end over, put the cap back on, and cranked her up. The Ford roared to life and provided many hours of recreation for myself and friends for months to come.

The weirdest thing happened once while driving the Ford. One day I was driving down Main Street in Lemmon with the standard load of kids hanging all over it when some kids yelled, "Hey, there goes a tire down the street! Let's get it, and maybe we can use it on this one. At that moment, the rear of the Ford dropped to the street, dragging one side. It was our tire which had come off, wheel and all, and was rolling past us down the street.

This same old Ford sat out in the snow storms all winter. When I wanted to use it, I would find the most likely pile of snow, dig down until I could crank it and the resulting shaking and banging would knock off most of the remaining snow. I soon learned that in the dead of winter, the radiator was just a nuisance. With the radiator removed, the car would run fine until the engine block became red hot. Then I would have to stop, let it cool down, and then drive on. This was possible because of the great tolerance between parts in the Old T Models. Today's cars would stop dead before they even remotely approached those temperature changes. 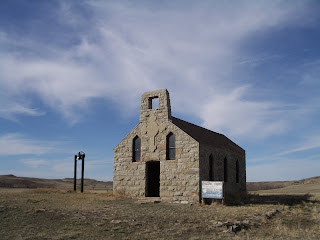 The impermanence of most old buildings on the prairie is palpable. As you drive across prairie landscapes, it’s not unusual to happen occasionally on the ruins of buildings from yesteryear. Usually what remains is merely a tilting, rotting shell, as it prepares itself for eventual internment in the soil. Often, what scraps remain have been carried off for use elsewhere. It is as if the prairie gradually swallows up anything not lived in, used, or maintained. Still, when my sister and I went looking for the old catholic church my Dad and his parents and siblings had attended at Glad Valley when we visited last March, we expected something to have remained. There was nothing.

We know that the church was still standing in the mid-1950’s. Rex Witte, one of the few inhabitants of Glad Valley remaining today, told us that the old church had been sold and hauled off years ago for some other use, and that the graves were moved to Isabel. That seemed sad. As the population thins out across the Dakotas, and more people move off the land, one of the last tangible reminders that there were once people here often is the churches. People will struggle to maintain them and keep them up, even after the congregants have all moved away, because they often are a last tangible link to the families and communities that preceded us, as well as the faith that kept them here.

Still, when folks we met in Eagle Butte mentioned the Old Stone Church outside of Timber Lake, and offered to take us there, it was an opportunity that we did not pass up. A small Episcopal chapel built of stone in 1923, the Old Stone Church – actually the Holy Spirit Chapel of the Standing Rock Mission – continues in use today by a handful of families. Built with great attention to detail of local sandstone, the church is a beautiful little building, and one that would be difficult to imagine ever being swallowed up by the prairie.

According to the Timberlake Historical Society, which maintains an information page about the chapel here, the Old Stone Church is located not far from Timber Lake "on the Buck & Lory Ward Ranch, which is north of the new BIA road linking Highways 63 and 65. The best way to reach the church is to turn north off the BIA road one mile west of the Broken Heart Ranch corner. There is a small sign. You then follow the trail as it proceeds north, then west and then north. Eventually you will find yourself overlooking Firesteel Creek, the valley and the church.” We took this route without a guide, got lost, and did a considerable amount of backtracking before we came on the scenic little valley the church is located in. It is a thing to behold.

It was difficult not to be inspired by the beauty of this little chapel—for example, the loving attention to detail in the stonework such as the cross carved out of the face of the sandstone above the entryway and the floor-to-ceiling archway that frames the sanctuary of the altar. 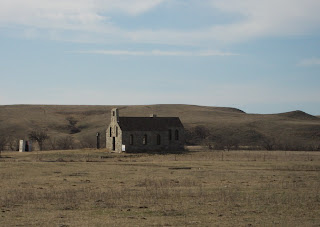 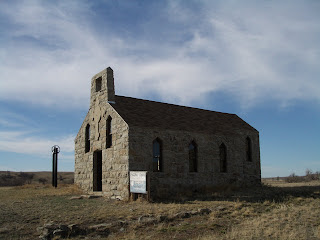 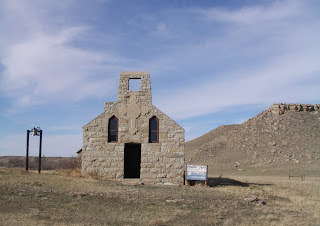 Note the Carved Stone Cross Above the Entry Way 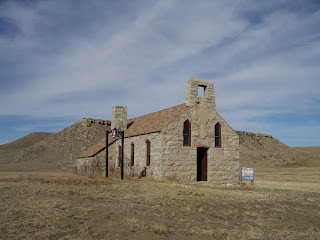 A Bluff Rises to the North and Rear of the Chapel 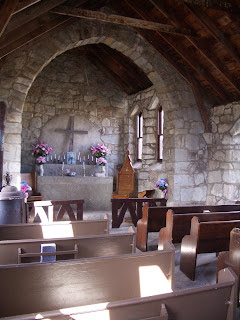 Interior of the Chapel (Note the Stone Arch) 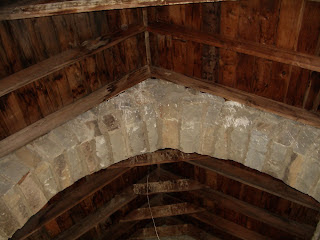 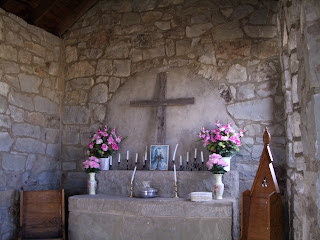 Stone Altar Nestled in the Sanctuary 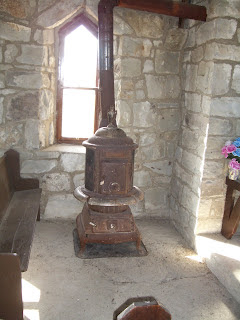