One article I’ve read lists the Model T Ford as one of the fifty worst cars ever built. I guess the following disputes that assumption entirely. 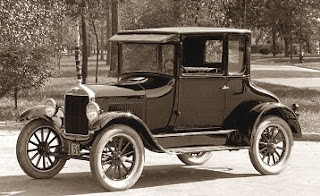 I believe this picture is of a 1925 Model T Ford. You see, I was very familiar with this car. Sometime in the summer of 1939, I wandered into the Lemmon Auto Company, a garage at the north end of Main Street in Lemmon, South Dakota. I was chatting with the Manager, a Mr. Olien, when he said, "How would you like to buy a great car? We just got this Ford in and it has hardly been driven." He then proceeded to show me a Ford, exactly like the one in the above photo.

I could not believe my eyes. This car looked like it had just rolled out of the factory. Mr. Olien got in, turned on the key and the old Ford purred like a kitten—that’s right, it started running just as soon as he turned the ignition switch.

I told Mr. Olien that if I had any money I would buy this car in an instant. He said, "How much money do you have?" I said, "About two dollars." And, he said, "You just bought yourself a new car. You can pay me the remaining eight dollars at one dollar per week."

I got in and drove away in perhaps the best car I have ever owned. It took eight more weeks to pay for it, but I loved that car. What was so nice about this car? To begin with, it even had the new car smell after all those years. It had always been garaged. It had been serviced regularly since it was new by this same garage. This automobile was so finely tuned that it started when you turned on the ignition switch. The engine hardly made a sound.

One of the outstanding features of this model was the transmission. In addition to the standard three foot pedals, it also had a two speed Ruckstell rear end, which means that you could gear down two speeds and it would go anywhere, just like a tractor.

I often had to go out of town to play for dances, almost every weekend, in fact. On those occasions I always rented a modern car from Bob Rainey of Rainey’s garage. Mr. Rainey seemed to have a soft spot for young people. He had two adopted sons, twins, Bob and Dick, just a year or two older than I. Whenever I came back from a dance job, for some mysterious reason they were never able to find the bill for the car rental. Actually they never did find a bill and I must have rented dozens of times.

I distinctly remember driving my Model T coupe home when I graduated from high school, and the last time I left the ranch by Thunder Butte, that beautiful old Ford was sitting there by the house. The tires must be real flat by now!

Most modern cars have front wheel drive; this is a given. Long ago, Thunder Butte dwellers learned that cars pulled better than they pushed. When you came to a very steep hill in an old Model "T" Ford, you automatically turned the car around and started to back up the hill. Usually when going in reverse you could manage to climb the steepest hill without a problem.

Long before I acquired the old "T" model from Roger Portney, someone had given me a 1928 Chevrolet. I have mentioned having to replace the connecting rod bavette routinely and a few other idiosyncrasies of the Chevrolet. (See my last post.) One of the more discouraging traits of the `28 Chev was its inability to hold water. The radiator was good for about ten miles before it would start to steam. In a couple of more miles the engine would begin to missfire, and water would have to be added if one was to continue driving.

One of the worst instances of running out of water was sometime in 1934. I would have been 13 or 14 years old at the time. I had just picked up three or four of the Briscoe boys, and probably a couple of other neighbor boys, and we were off to a dance in Usta. About half way to the dance, somewhere in the vicinity of Wedgetent Butte, the Chevy started to steam. In a couple of miles further, she refused to go any further. We turned off the car, sat there in the gathering dusk of evening, and discussed how we were going to get to the dance, or better yet, how we would get home without water, as the nearest water was miles away in either direction. After some long discussion, one of the boys stood up on the front bumper of the car and urinated in the radiator. Without a word, each of the boys lined up and did the same. Again, without a word, we all piled in and drove on to Usta to the dance. After the dance we refilled the 'stink'n' car and drove home without further incident.

Having traded the Chevrolet for the topless Model "T" Ford, and after months of 'fooling' with it, it finally came to life and I was driving back to town when I discovered another problem. In the old Model "T's", the radius rods (steering) were connected together loosely, and if you turned the steering wheel very far in either direction, the rods between the front wheels would flop over and the car would go in the opposite direction from which you steered. Turn left, and the car would suddenly go right. Like I said, this was all new to me, so on the way back to town, and as I was passing the Petrified Wood Park on my right, I jerked the wheel left to avoid hitting a rock in the road, the Ford instantly went right. The throttle was a lever on the steering column. In my haste, as I was racing through monuments of petrified wood at a breakneck pace, I pulled the nearest lever which happened to be the spark advance and that just made the car run faster. Steering like a 14 year old madman, I raced through all of the petrified wood park. Steering left to miss a pylon, the car would race to the right around the pylon and that was the way I navigated the entire acreage of the Petrified Wood Park in Lemmon that day. After much experimentation, I discovered that I could tie strips of inner tube rubber to the radius rods, and that would prevent them from flopping over and the car would steer in straight line. 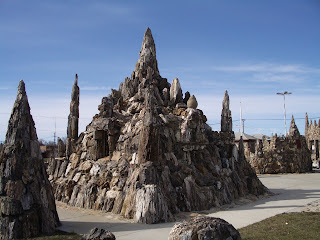 One other problem was the throttle lever on the steering column. I never could get used to pulling and pushing that lever. The result was a stick tied over where the hood was meant to be, with a wire connected to the carburetor, and the other end of the stick protruding into the driver's compartment. Although it looked very clumsy, this stick arrangement worked exceptionally well, and I would go racing around town and all over Perkins County and North Lemmon, North Dakota, with my hoodless, topless, sometimes radiator-less Model "T" Ford.

If anyone ever reads this stuff, you may wonder how I survived the legal world. The answer was this—the State of South Dakota did not issue driver's licenses in those days. The local chief of police, Pat Jones, used to chase me a lot. But, as soon as I raced out of town, he would give up the chase. As he said to someone later on, "I would just chase him until he left town, and then realizing he was out of harms way, I would give up the chase."