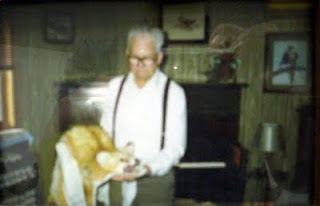 
When you gaze across the prairie in northwestern South Dakota, the land appears so empty that it comes as a surprise to find out that many amazing people have lived there. Earl Engebretson was surely one of them. According to my father:

“Earl was a hot accordion player. I remember playing for dances with him and Clarence Doan at the Victor Benson dance hall, when I was in high school [in the 1930's]. That isn't exactly what Earl was noted for, however. Out on his ranch near Chance, Earl built and stocked the most elaborate museum of natural history that I have ever seen. He had things as varied as a two headed Cobra, a two headed calf, and a bewildering assortment of animals and things which filled many, many buildings. I even bought a flat iron from Earl that one of his relatives had brought from Norway. I understand the entire museum was moved to Bison following Earl's death.”

Earl was born in 1914 and, except for service in the military during World Ward II, lived in South Dakota all his life. There is a great photo of Earl with his accordion in the book, The Veals of Chance, South Dakota, edited by Verla Lang. There also is a photo of the younger Earl attired in bow tie and a school boy's cap standing behind a table, proudly displaying some of his taxidermy specimens. Despite his skill, accordion playing wasn't what Earl was best known for. Earl was a skilled naturalist, taxidermist, and ran a museum that was a wonder for all who beheld it on his ranch outside of Chance for years.

Earl got started with taxidermy at an early age, taking a correspondence course in 1927 when he was just twelve. His taxidermy collection grew extensive enough that he opened a museum on his ranch in 1954. Most of Earl's specimens came from the area where he lived, although my father remembers seeing quite a few that were from much farther afield on his visits to the Engebretson place. Although Earl was something of a home-grown naturalist, he also attended college in Spearfish, where he received a teaching certificate. In fact, Earl taught school in the area until 1968.

Earl donated his taxidermy collection to the town of Bison in 1995, a year before his death. The collection lives on displayed at Earl's Museum in Bison, a special place that I intend to devote some time to in my next post.

Editor's Note—One of the sources I drew heavily on for this post was a story titled, “Earl's Museum,” by Jim Nelson. Jim's story appears in Lang, Verla (editor), The Veals of Chance, South Dakota, 2008. 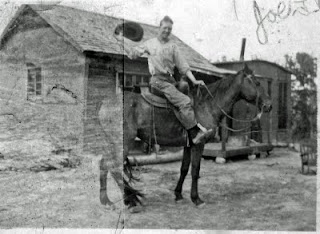 Some weeks ago on a visit to California, I pulled my grandmother's old photo album out of a closet and uncovered a trove of old photos -- including a few of photos of the house my Dad grew up in on a leased spread several miles south or southwest of Thunder Butte on Thunder Butte Creek. The ranch was called the 7A- (or "Seven A Bar"), and was leased from R.L. Foster, Jr. Interestingly, I went looking for the place last July, but couldn't find any ranch roads or tracks that ran out that way. And, with three foot high hay and grass covering the country -- Gene Ulrich who is in his 90's said that it was the tallest he had ever seen it -- I wasn't wandering far from the visible ranch roads. Still, these photos bring to life a little bit what the country looked like and what the conditions were like where my Dad grew up.

The photo above has 1936 printed on the back, but more likely is from 1926. It shows my Uncle Joe, who would have been about 16 at the time, on top of a horse in front of the Crowley ranch house. The original photo is only 2 inches by 3 and the left hand side is entirely washed out. I attempted to bring out some more of the detail with PhotoShop, but you can see that when there isn't much to work with, this is about as good as the results get. The next photo, below, also is probably from the same period and shows a horse tied up in front of the house. The photographer's shadow is in the foreground. One interesting thing is that the photo shows packed earth built up around the base of the house. The purpose would have been to help keep the place warmer in the winter. Again, there isn't much detail to work with here, but if you click on the image to enlarge it, you can barely make out a cat, a child's wagon, and a dog directly in front of the house. 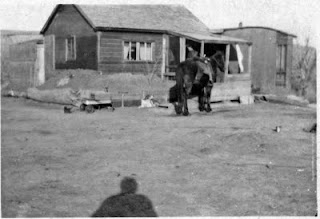 The next three photos are all dated from 1926. The first shows two horses tied up in front of the house. The next shows my grandmother (Mayme Crowley) and a tall cowboy, Glenn Tate, with a horse in front of the house. Glenn used to stay at the Crowley's place. A younger fellow, perhaps my Uncle Neal or Joe, is at the left in the background. The last photo shows what looks like my Aunt Cece chopping wood in front of an outhouse. Cece would have been only eleven in 1926, and it looks like another kid is sitting in the foreground facing away from the camera -- this is probably my Dad, who would have been five. 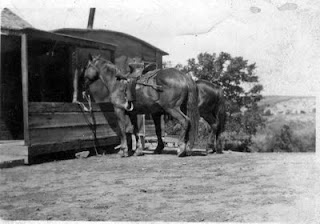 Crowley Ranch House with Horse Tied Up Out Front, 1926 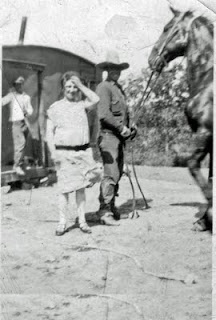 Mayme Crowley and Glenn Tate with Horse at Crowley House, 1926 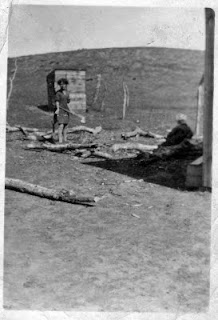