Arctic Blast -- The Old Soddy Would Come in Handy Tonight

After posting my story on the Anna Carr Sod House last night, I couldn't help but notice the weather forecast for Bison, South Dakota today. At 5:00 a.m., the temperature was -17 degrees Farenheit, but according to AccuWeather.com, the RealFeel@ -- what it actually felt like was -51 degrees. Those are the kind of conditions that prove the superiority of the old sod house to just about anything people live in today. A sod house could be kept warm at a fraction of the cost of a house constructed with more conventional building materials. Of course, under these conditions, you wouldn't want to wander outside no matter what your style of dwelling.

The forecast says that it will get down to a real -22 degrees at midnight tonight. I know where I'd be spending the night if I lived in Bison -- at the Anna Carr Sod House. In any case, I know that snow is in the forecast for me tonight. 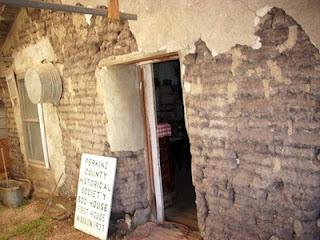 After showing me around Earl's Museum in Bison on July 17th, Jan asked if I wanted to see the Anna Carr Sod House. I had never heard of the Anna Car Soddy. I didn't want to put Jan to any more trouble after she had gone out of her way to open the museum just for me, but she insisted on showing me the old sod house. She led me to another large steel shed nearby that has been erected to help preserve the old house, fiddled with a lock, and swung the door open. What greeted me has got to be one of the best preserved old time sod houses from the pioneer days on the northwest South Dakota plains.

The Anna Carr Sod House was the first building erected in Bison and also served as an early post office for the area. In fact, there was no town of Bison yet when Mrs. Carr and her two sons built the sod house in 1907. Housed today under a modern steel structure for protection from the elements, this building is one of a small handful of surviving examples of the type of dwellings many early pioneers erected on Midwestern plains. I was especially interested since my Dad was born in a sod house near Thunder Butte in 1921. 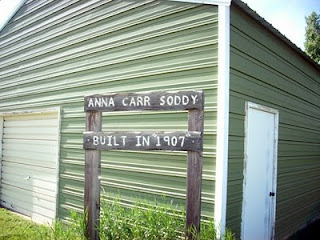 The Anna Carr Soddy has walls that are about two feet thick or more. The thickness of the walls and the sod made for good insulation from both the winter and summertime elements for early settlers. In the summertime, the temperature inside the house would stay fairly cool. In the winter, you were protected from the wind and snow, and a small stove combined with the thick walls would keep you pretty cozy.

What is sod? Basically, it is just mud mixed with hay or prairie grass and laid out to dry in the shape of bricks. Sometimes settlers just carved out “bricks” from shallow cuts in the ground, so that the grass and its roots would already be mixed with the soil. You would stack them to create a wall, which might be topped off by a tar paper roof and sometimes just sod piled on top of boards or branches. Sod houses were fairly sturdy in the short run, but would tend to dissolve or melt away after a long period of exposure to the elements unless it was constantly tended to and repaired. Most of the pioneers who constructed such buildings abandoned them as soon as they could afford more permanent dwellings constructed from wood. So, it is quite rare to find one of these sod houses still preserved.

Extra care over the years clearly has been taken with this soddy. For one thing, the exterior walls were all surfaced with what looks like stucco and quick lime. Also, the walls on the inside have been covered in siding to give the house the feel of a real home. Care also has been taken by Bison's residents to show how this house might have looked when it was lived in. Tour the house, and you can see an array of period furniture and household implements.

Old Organ and Furniture On Display in the Sod House*

The Anna Carr Sod House, operated by the Perkins County Historical Society, is a must see attraction for those interested in the area's history.

*Note that these two photos are not mine, but are located on the web site for Bison tourist attractions, including the Anna Carr Sod House. 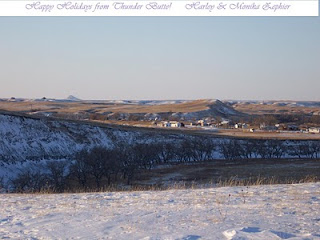 Here's a happy holidays greeting from Thunder Butte, belated in posting only because I was away for the holidays. It comes from Harley and Monika Zephier who have a very nice website displaying their native American artwork, Owl Tipi Art (click here). I believe that the card shows the snow-covered village of Thunder Butte on the Cheyenne River Sioux Reservation, with Thunder Butte -- the butte -- seen in the distant left center of the photo. The scene is stunning in its beauty.

I encourage you to visit Harley and Monika's site, Owl Tipi Art, where you can find an online exhibition of some of their Dakota/Lakota art, obtain information about upcoming exhibitions throughout the area, and support their continued efforts by purchasing some of their very lovely native American artwork. 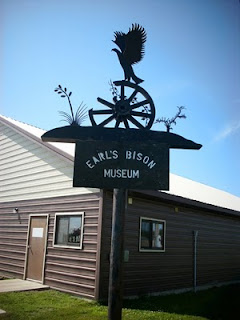 On July 17th, at the close of business trip to South Dakota, I drove out to Faith and checked in at the Prairie Vista Inn. It was only about 3pm and I debated whether to drive out towards Thunder Butte or go see Earl's Museum in Bison. I'd never been to Earl's Museum and had heard so much about Earl Engebretson from my father, so that's where I went.

When I got to Bison, I drove up and down what looked to be a couple of the town's major thoroughfares, but saw no sign for a museum. This was surprising, as my Dad's tales of Earl's stuffed animal collection sounded like something to rival the Smithsonian's Natural History Museum in Washington, DC. Finally, I pulled up in front of a shop and accosted a woman who was climbing into her car. When I asked her where Earl's Museum was, she insisted on leading the way and having me follow her there. A few blocks away, we pulled up in front of the museum's large steel building, but the sign in the window said it was closed. Not in the least bit concerned, she led me to another woman's house a short distance away. 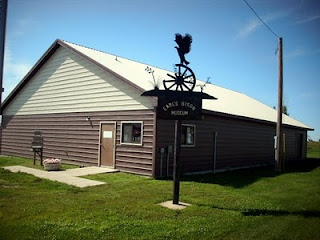 Jan*, who runs Earl's Museum, said that the museum was only open a few days a week. Seeing that I had come from a long way off, though, she insisted on opening the museum to give me a personal tour. The museum, which now shares its space with the Bison Public Library is a large room whose walls and center section are adorned with hundreds of mounted and stuffed animals and birds of every assortment. Most of the creatures are ones that are native to the prairie. And, while there are an assortment of bobcats, snakes, and even a two-headed calf, most numerous are the hundreds of specimens of every variety of wild bird and fowl. 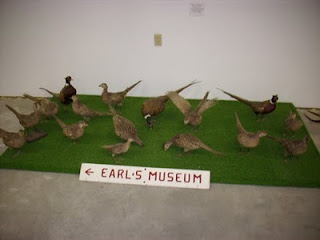 A Variety of Prairie Fowl on Display

The museum is Earl Engebretson's personal collection and taxidermy handiwork from years spent attempting to document the life of the prairie. It is quite a sight to behold. In fact, I've never seen anything like the variety of mounted creatures in Earl's Museum even in a big city museum. What's remarkable about these creatures, too, is that this is a collection of mostly native South Dakota birds and animals – some of which no doubt are quite rare in the wild today. Of late, the museum also has been collecting artifacts from Bison's pioneer days, which makes a visit all the more worthwhile. 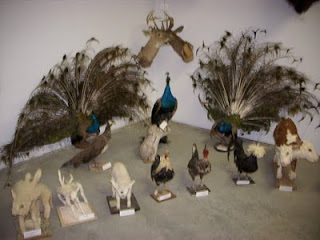 Peacocks, Chickens, and the Two-Headed Calf

Just a little history about Earl's Museum – Jan told me that a committee was formed and fund raising started in 1993. To move the collection to the museum from Earl's ranch, Earl had to transfer his state game licenses. Because of the requirements of the Migratory Bird Treaty Act, federal fish and wildlife permits also had to be issued. The museum was dedicated in 1995, a year before Earl's death. Earl's Museum is well worth a visit:

The museum also has a web page on the internet that can be visited here.

*I'm honoring Jan's wish for some privacy by not using her last name. Come to Earl's Museum, and I'm sure that you'll meet her!

Editor's Note--Although Earl's Museum has hundreds of mounted birds on display, my photos do no justice to the exhibits and many of them did not turn out well enough to post here. Alas, my wife was on another trip with my son, and they had the "good" camera. 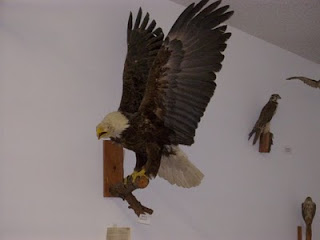 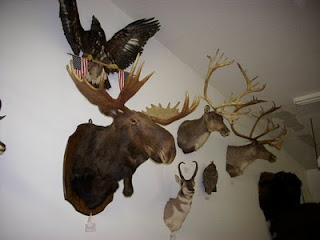 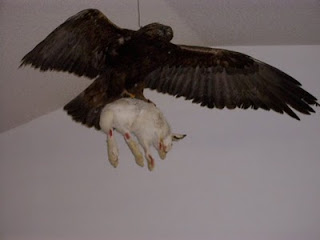 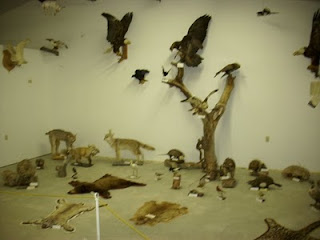