Once You've Heard the Owl

An Island in the Storm

Winters at Thunder Butte Were a Kick 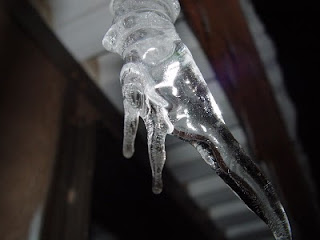 Yes, winters at Thunder Butte were a kick. I remember my Dad getting up first to get a fire going in the heating stove, then he would break the ice in the water bucket and in the wash basin, and then he would jump back in bed until the stove got hot. Even with a blazing fire in the wood stove, when it got down around 30 below zero, icicles would form on the window sills and other places from our breath and the coffee pot. It never did get actually warm in the house. There was a lot of standing close to the stove.

Wolves long ago disappeared from the Thunder Butte area, driven to local extinction in their competition with area ranchers. I wrote here in this blog some time ago about the intense hunt for one of the last remaining wolves in the area, Three Toes, which locals thought was intent on visiting as much destruction against their livestock as possible. In the telling of the tale of Three Toes, the battle of man against beast used to take on epic proportions. Wolves were hunted in order to reduce livestock losses, which in later years took on controversy as the species came to be seen as endangered. I had never heard of wolves being hunted purely for sport, which somehow seems offensive, until I ran across the following account from a Canadian, Charles Prim, who passed through the area in 1902:

“It was on Standing Rock, T. R [Standing Rock Trail] in the Western South Dakota in the month of July, 1902. I have four stag hounds and will have an increase soon I expect, they are game all through. We left Evarts on the Big Muddy River with a light wagon, a pair of good bronks, the long legged kind, with a good camping outfit, my wife and I a hunting went. 125 miles west a friend of ours lived, George Darling by name. On our way out we got 4 wolves, one an old three legged one and it was a sight to see how she could run. On our way back we run into 9 wolves in a bunch. It was right at White Butte about 9 miles west of Thunder Butte. The first one we got all right after a short run and the rest run east about 3/4 of a mile, and when the dogs got up to them they were pretty well played out and we were so far behind the dogs. The wolves turned on the dogs and their [sic] was a fight like as I never want to see again if they are my dogs. It was a very hot day and water was scarce and the dogs were dry, but they must fight it out. Well the way we came down that draw was not slow, the wolves when we got their split up; but it seemed they had not enough of it. Then the dogs got after the old ones that led off to the south, and one they crippled, they would throw him, then his mate would help him, and as we came nearer the dogs were after the one that was not hurt. He led off and the dogs after. I gave my wife the lines and with shot gun in hand jumped out, ran around a little hill to get a shot at the one that the dogs had hurt. I got a shot and he cashed in, I looked up and away off to the south goes the hounds, wolf, team and wife doing well, wife was doing good driving and the dogs good running, they mix, all of 1-1/2 miles from where I was. I started to run but my shoes were thin and cactus very thick. I soon had enough and some to spare in my feet so I sat down and pulled cactus for a while. Over the hill the fight went on and after a little while the horses came over the ridge and a big wolf on the hind end of the wagon. My wife felt very proud as she took him alone with the dogs. That was three out of the nine and our dogs were pretty well tired out, so we loaded them all in and drove slowly off.

“At dinner time I went to get the lunch box out of the back end of the wagon, I said, "Chub what is the matter, it is light" and well I might. We had lost our frying pan, coffee grinder, canned goods, all but one can of tomatoes and one can of milk. As luck would have it we had bread in a sack under the seat, so with coffee, bread and meat we went the 35 miles, left back to town but the dogs did not like to run as their feet were sore and they were cut up quite a little.” 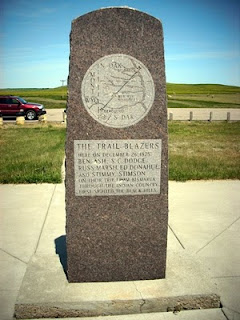 I’ve stopped at the Ben Ash Monument before without realizing its significance. On July 17th, while on my way to Faith, I took a closer look. About 30 miles west of Faith, South Dakota, on Highway 212, travelers may stumble across the monument at a little cut-out or rest area just off the main road. The monument celebrates the first sighting of the Black Hills by Ben Ash and a small party on December 26, 1875, along what came to be known as the Bismarck Trail. I wrote earlier about the Bismarck Trail here. Of course, this was neither the first sighting of the Black Hills by people, whether Native American, white settlers, fur trappers, or other passersby. Also, the Bismarck Trail did not yet have that appellation, as a survey for the trail wasn’t commissioned by the Dakota Territorial Legislature until 1877. However, Ben Ash and his party were the first to mark the route from Bismarck, and Ben Ash's name was closely linked with the trail for years.

The Ben Ash Monument is an interesting marker and does show approximately where the trail cut across the rolling prairie and today’s modern highway. It is often said that you can see remnants of the trail in the patterns of the vegetation as you gaze out across the prairie. On July 17th, as I peered into the distance from the Ben Ash monument, I could see no signs of the trail. Of course, the prairie grass was about three feet tall from an unseasonably wet spring and summer. 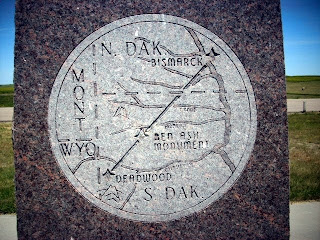 The Ben Ash Monument Shows a Map of the Bismarck Trail

Later that day, I passed another marker about 35 miles north of Faith on Highway 73 while making my way back from Bison. 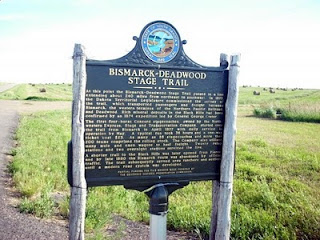 This marker also notes the location of the Bismarck Trail. One can’t be certain of the exact route of the trail as you gaze out on the prairie, but if I were a betting man, I’d say that it likely would be the route of the modern ranch road that is visible in the background of the two pictures below. According to this marker:

“At this point the Bismarck – Deadwood Stage Trail passed in a line about 240 miles from northeast to southwest. In 1877, the Dakota Territorial Legislature commissioned the survey of the trail, which transported passengers and freight between Bismarck, the western terminus of the Northern Pacific Railroad, and Deadwood. Rich mineral deposits in the Black Hills had been confirmed by an 1874 expedition led by General George Custer.

“The first four-horse Concord stagecoaches, owned by the Northwestern Express, Stage and Transportation Company, started over the trail from Bismarck in April 1877 with daily service in operation by May. A typical run took 36 hours and a one-way ticket cost $23. As many as 26 stagecoaches and more than 200 teams comprised the rolling stock. The company also utilized many mule and oxen wagons to haul freight. Twenty relay stations and two overnight stations serviced the line.

“A shorter trail to the Black Hills was later opened from Pierre, and by 1880 the Bismarck route was abandoned by official traffic. The trail subsequently served area ranchers and settlers until a modern road system was developed.” 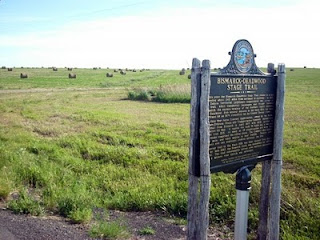 Ranch Road Possibly Follows the Route of the Old Trail

The Trail was long out of use by the time my grandfather and his family moved down from Bismarck at the turn of the last century. I’m not clear of the route they took to the environs around Faith, but know that it passed through Fort Yates on the Standing Rock Reservation. Still, I’m sure that in their day they would have seen clear evidence of the old Bismarck Trail in the wagon ruts that crossed the land not far from Thunder Butte, where they lived.


What happened out on the prairie 65 million years ago? Why are there so many bones of the duck-billed dinosaur (Hadrosaur), Tyrannosaurus Rex, and other ancient dinosaurs scattered in the sediments of western South Dakota? Well, here's an excellent way to learn first-hand from the scientists themselves.

The Children's Museum of Indianapolis has announced dates for its 2010 program of Family Dino Digs in South Dakota. Dig dates this year are July 3, 5, 6 7, or 8, 2010. The cost is $125 per day for members of the Museum and $155 per day for non-members, which includes lunch and transportation to the dig site from the hotel and back again. You'll stay at the very pleasant Prairie Vista Inn in Faith. A continental breakfast is provided by the hotel, and you will be responsible for your own dinner at one of Faith's two restaurants or hamburger stand -- and for your own transportation to the town of Faith.

On my trip to Faith last summer, I ran into Dallas Evans, a paleontologist with the Museum, and one of the leaders of the Museum's fieldwork at the local Ruth Mason Dinosaur Quarry. I also was fortunate enough to meet the rancher whose property these dinosaur bones are buried on -- he wishes to remain anonymous -- and receive a personal tour of the site where the Children's Museum holds its dinosaur dig sessions. I'll post more about my experience later. But, in the meantime, you can read more about the Family Dinosaur Digs on Children's Museum's very own Dino Blog. Registration is open now for this very educational experience for families and children. With winter upon us, summer seems like almost a year away, but capacity for this very unique experience is limited, so do not delay!

Editor's Note--I have no affiliation with the Children's Museum of Indianapolis, but am recommending the Museum's Family Dino Digs based on my visit to the dig site and belief that adults and kids alike would find this unique educational activity very interesting. Now, if only I could convince my own youngster to sign up with me!

*The photo above actually is a click-through link to the original photo, which appears on the website of The Children's Museum of Indianapolis Dino Blog.
Mike Crowley Wednesday, February 03, 2010 | (0) comments |