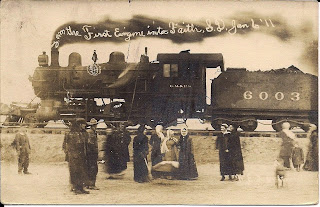 Here's an interesting photo of the first train to stop at Faith, South Dakota, after the establishment of the new end of the line. In its heyday, the Chicago, Milwaukee & St. Paul Railway, which was usually referred to as the Milwaukee Road, stretched from Chicago and the Great Lakes to Washington State. Various branch lines, including the one that ran to Faith, were important conduits of immigrants anxious to take up ranching and farming in the Dakotas. These lines also replaced cattle drives as an inexpensive way to ship cattle off to market back east.

The new town of Faith reportedly got its name because "Faith" was one of the daughters of an important Milwaukee Road investor. Construction of the branch line took place in 1910, and then the first train pictured in the photo above arrived on January 6, 1911. It's not clear whether the people pictured in the photo are the first group of immigrants to arrive in Faith via train. However, subsequent trains brought many more people who helped to settle the town and nearby homesteads.

(Editor's Note--Apologies for my absence of over a year. I offer none but the typical excuses: career, family, a move, etc.)