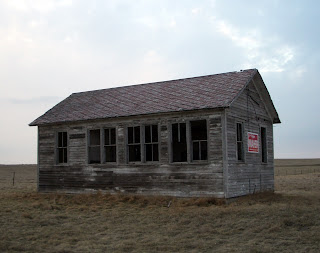 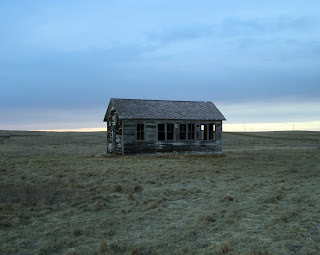 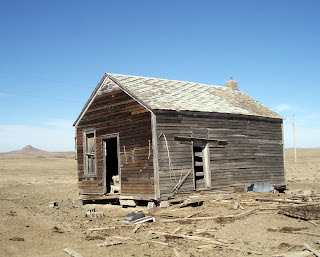 Thunder Butte is visible to the left of the schoolhouse in the above photograph.

While I was visiting Faith in March, Gene Ulrich related the following story about my Uncle Neal....

The years 1934 through 1936 were dry years around Faith, South Dakota. Neal was running some cattle with a rancher in the area. They got an offer to winter the cattle down in Martin on some good winter pasturage. Gene Ulrich signed on to help out with the cattle. Neal took Dorothy with him. After they got down there with the cattle, some of the locals felt bad that Neal and the other outsiders had gotten their hands on good land for grazing cattle for the winter. One night at a bar, three of the locals decided that they were going to take Neal down. Neal got the jump on them, though, and dropped each of them with a quick fist. They quickly retreated to their side of the bar and that was the end of that.

Gene Ulrich also told me that Neal was an extremely friendly man, especially so with children. He was viewed as quite economically successful, holding down the police job for 20-25 years, handling a mail route (which Gene occasionally helped out with), and variously tending or managing the Faith municipal bar. Some people were jealous of Neal's success and would look for opportunities to pick fights with him. Taking down Neal would have been a big deal since Neal was such a good fighter, according to Gene. Gene said that Neal didn't shy from a fistfight, despite being a really nice guy. If someone said a cross or ornery word, Neal would sometimes respond in kind, almost goading the person into the inevitable fistfight that Neal would always win.

I ran into another old friend of Neal's in Faith, Gene Schaff, who said that he used to pal around with Neal in Faith. When I asked Gene what Neal used to do for fun, he told me that Neal loved to get into fistfights.

Photos from March 27th Trip to the Butte

Below are a few photos from our March 27th attempt to visit Thunder Butte using an old road from the northeast. Needless to say, the land eventually got too rugged on the route we took and road washed out, preventing further progress. We attempted to walk the remaining distance, but we were not dressed properly for the cold wind and the shadows were starting to get long. So we failed to reach the butte on this attempt.

The land around Thunder Butte had kind of a spooky feeling to it. When we hiked down the old road toward the butte, I felt that we were almost following a trail into the past. After the road washed out and we walked another couple of miles towards the butte, the sense of isolation was palpable. I almost thought that we would encounter our family's ghosts at any minute as we trudged toward the area near the butte where my dad's family lived until the late 1930's. All we found, though, was loneliness, wind, and scrub grass.

You can click on the photos to enlarge them. 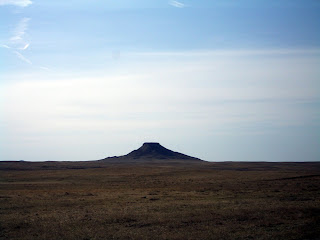 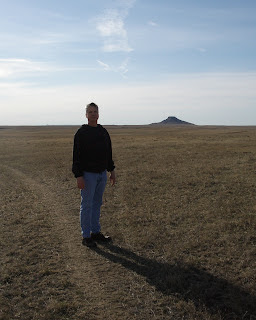 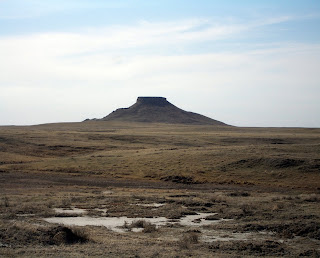 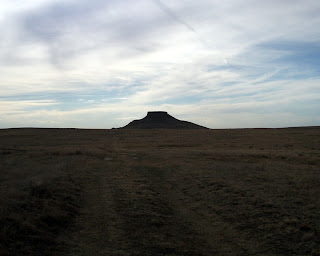 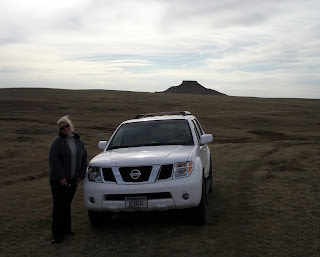 As I mentioned in my earlier post, my sister and I found our uncle Tommie's grave at the cemetery in Isabel on March 27th. Its location had been lost to family members. My dad thought he recalled that Tommie was buried at Isabel, but wasn't sure where. The photos below show Tommie's grave marker, as well as views of the Hillview Cemetery where he is buried. The cemetery records show a plot registered to or occupied by a Mr. Crowley adjacent to Tommie's grave. Our best guess is that our grandfather had purchased two plots when Tommie died unexpectedly of appendicitis, although we are not sure why he would have done so. Was it the knowledge that death could strike unexpectedly at any time, as it had in young Tommie's case?

Something else about the cemetery--the Protestants and Catholics are buried in different sections of the cemetery. Naturally, Tommie was buried in the Catholic section. Our Uncle Neal's first wife, Dorothy, was from the Tidball family, and we found a lot of folks with her last name buried in the Protestant section. That was a bit of a surprise. However, we were told later in Faith by folks who had known Neal that Dorothy had converted to Catholicism when she married Neal.

You can click on the photos to enlarge them. 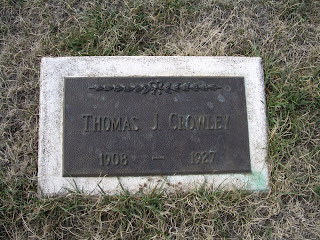 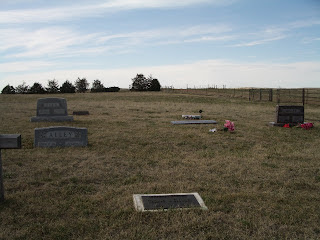 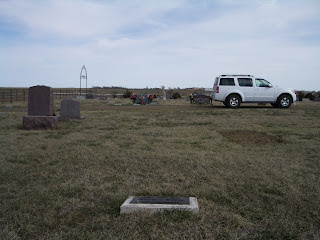 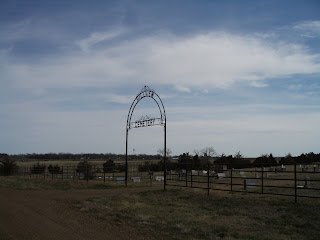