Thanksgiving was not celebrated too much around Thunder Butte when my Dad was growing up. Thanksgiving wasn't celebrated on any kind of a regular basis anywhere in the U.S. before President Franklin Roosevelt began declaring annually a national day of thanksgiving beginning in 1939. Then, Congress enacted the holiday on a permanent basis in 1941. So, despite the lore about the Pilgrims and the Indians sitting down to the first Thanksgiving meal, despite our traditions of the roasted turkey and trimmings, and despite all of the other customs that we associate with Thanksgiving, the holiday as we know it really does not go back very far. If it did, one of the things the Crowleys may have had for their Thanksgiving meal would have been a delicious pumpkin pie. In fact, my Dad does recall his mother making delicious pumpkin pies this time of year and at Christmastime with plenty of fresh whipped cream.

It would be nice if we were able to say that the following comes from a traditional family recipe. Unfortunately, I don't know any of the recipes that either of my grandmothers might have used, and my Mom used store-bought canned pumpkin and a recipe on the side of the can. Nonetheless, this pumpkin pie recipe is one that I concocted some years ago, and is rather tasty:

Cut in half pumpkin. Scoop out and discard stringy matter and seeds. Place both halves down (cut side) on a pan and place in the oven at 350 degrees for about 45 minutes to an hour. Remove pumpkin when meat is so soft that the skin pulls away easily.

Combine 5-1/2 cups of pumpkin meat with the following:

Preheat oven to 425 degrees. Pour pie contents into a prepared pie crust lining a pie tin -- should fill 4 to 5 9-inch pie shells (use prepared frozen ones, if desired). Bake at 425 degrees for 15 minutes. Then reduce heat to 350 degrees and bake for another 45 minutes to an hour. Pie is finished when a knife inserted into center and removed comes out clean.

The official t-shirt of the ThunderButte.blog is here! Better said, I've put my meager creative talents to use to create a line of merchandise featuring Thunder Butte. Last March, I was in an art shop in Rapid City featuring the work of a variety of artists highlighting the landscape of South Dakota, including many of its buttes. Sadly, however, I found none featuring Thunder Butte, which I find truly picturesque. In fact, I asked the shopkeeper if they had any art featuring the butte and unfortunately they had never heard of it! 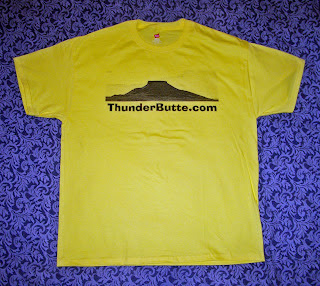 In creating a number of t-shirts, a poster print, and eventually additional merchandise featuring Thunder Butte, the point for me is not to make any money at this. Originally, I just was looking to design a t-shirt to order for myself – and, indeed, I did get one. Now, I want to afford the opportunity to anyone else who would like a Thunder Butte t-shirt or other merchandise to take a look – and if you like what you see – place an order. Again, you can browse the Thunder Butte merchandise and purchase it, if you would like, by clicking the link here.

If you have any suggestions, please send those along, as well, using the comment link below.