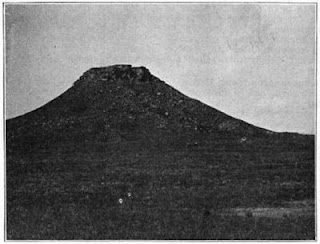 Here's an early photo of South Dakota's Thunder Butte found in a book published in 1918, now in the public domain and searchable via Google Book Search. The book is Stephen Sargent Visher's "The Geography of South Dakota." The caption beneath the photo reads simply as "Thunder Butte, Ziebach County. A typical butte. Note the team and rig near the base of the butte."

Unfortunately, the scan is not very good and you can't make out -- at least not without a good deal of imagination -- any horses and wagon (or buggy). Also, there is no other real mention of this specific butte in the book. But, the photo is interesting as it does date from a time when my grandfather and his family were settled nearby. I believe that the photo was shot from approximately north or northeast of the butte.

You can compare the old photo with ones I took from the same vantage point just a couple of years ago here.

There's Something About These Stories That Resonates Today

There is something about some of the tales told around Thunder Butte during the Great Depression that still resonate and amuse today during this, the greatest economic downturn since that time. Take this one, for instance, from the Faith Gazette of January 21, 1932:

"A neighboring editor, hard hit by the depression developed a sense of touch to a very high degree. The seat of his trousers are so thin that he can sit on a dime and tell which side is up, heads or tails. If the depression lasts much longer, he will be able to tell the date on the dime. The question which naturally arises is 'How did he get the dime in the first place?"

Editor's Note--This and other tales from the Great Depression in this part of the country can be found in "South Dakota's Ziebach County, History of the Prairie", published in 1982 by the Ziebach County Historical Society, Dupree, SD, which is also located on the internet here.
Mike Crowley Wednesday, April 01, 2009 | (0) comments |