A State With a Fabulous Magazine

I've been a reader of South Dakota Magazine for a couple of years now, and I really enjoy the stories the magazine runs about the places, the people, and the history that make South Dakota such a wonderful place to visit. Simply put, it is my favorite magazine and my only complaint is that it isn't published more than once a month. So, it comes as a bit of a surprise that the magazine gave our little corner of the web a big boost this month with Bernie Hunhoff's little piece on ThunderButte.com. Frankly, I'm flabbergasted as they've already mentioned us once before. If this doesn't light a fire to help me get some of those still unpublished stories out of the can and onto the web, I don't know what will. Thanks much, Bernie, and thank you, South Dakota Magazine! 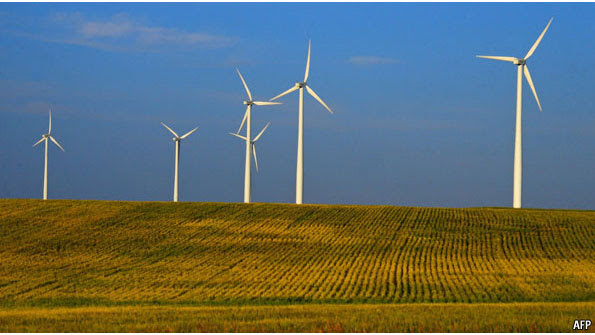 The Economist magazine includes an article (click here) this week about the potential for clean energy development fueled by wind turbines to aid the Dakota tribes. There's no doubt about it, as the article points out, one resource that is plentiful out on the plains is wind.

Setting up wind farms where multitudes of turbines would capture the prairie breezes to generate electricity is a fine idea. There are considerable hurdles, however, not the least of which are the difficulties of negotiating contracts in regions where tribal governance is beset both by chronic economic underdevelopment and the Federal government's heavy paternalistic hand. Another major technical difficulty is distance from population centers. There is no effective transmission network for moving electrical energy over long distances, and building one would be costly.

Even if the distance of tribal areas from urban electrical consumers is an insurmountable problem, there still is merit in looking to wind power for meeting the electricity needs of tribal areas, not to mention the non-tribal towns that dot the Dakota landscape. Even if big wind farm development is impractical, smaller numbers of wind turbines could still meet much of the electrical needs of scattered rural communities.